Facebook! I can see the incredulous look on your face. How can Facebook be the reason for getting back on blog? I don't know if you remember or not - in the earlier days, the wall of your Facebook page used to be pretty neat and clean. You would get information about your family and friends and people who matter. It was fun and the addiction went way way deep.

Then suddenly - as your friends list grew - you saw your wall changing shape. Someone climbed down a tree - it is a Facebook post. Someone ate a chewing gum - it is Facebook post. And suddenly your entire wall was awash with Tom, Dick's or Harry's post except your own. Add to it the growth of smart-phones and you had the perfect recipe for a big load of shit. Suddenly you had no clue who the guy in the picture was - it was just some another post by another anonymous; floating down your wall. People who mattered had disappeared in this flood on anonymous post.

I don't have any grudges with Facebook. (Well, not exactly true - Mark Zuckerberg preaching free-basics is something which I find hard to swallow) But the entire experience on Facebook now a days feels like "that-i-am-not-in-control". And this is why I decided to revert. Yes I will be there on Facebook and Yes I will be there on other social media - but I guess I will start blogging more. For one simple reason - "It gives me that feeling of control"

Popular posts from this blog

October 09, 2006
Another Durga Puja finished on the 2nd of October. Every year, I cannot help, but marvel at the time, money and energy that is expended in making the function a success. Most of the times I think that the whole thing is a complete waste. Consider for example. In the city of Calcutta itself around 2800 Durga Pujas (CESC Estimate) are held. Each Puja Comittee spends a tidy sum every year. For the sake of ease of calculation, if we assume that every comittee has a budget of Rs. 10000/- only, then the total expense on Durga Puja - just on conducting the Puja - comes to a staggering Rs. 28,000,000 or simply put Rs. 28 million. This is an extremely conservative estimate as because most pujas have budgets that run into a few hundred thousand of rupees. This also does not include the expenses incurred by a family on Puja shopping. Just imagine, if Rs. 28 million was spent on some project or some socially beneficial work. Calcutta could in my opinion become the best city of the world. Perhaps
Read more 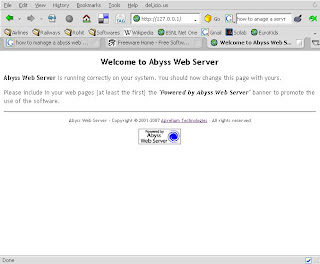 L et me first explain the background. I am working as Reader at Xavier Institute of Social Service, Ranchi. Ranchi is the capital of Jharkhand - a state in country of India. At XISS, I teach marketing and research related subjects in three different departments - Information Management (IM), Marketing Management (MM) and Financial Management (FM). Each department has different requirement of teaching and from time to time i need to give my students handout and notes. XISS is served with a 2 GB data pipe taken from the Internet Service Provider - BSNL. The 2 GB data pipe feeds into a single server from where it is distributed to the faculty and students using Wireless Area Network. Now, in the city of Ranchi, the ISP services are more down than up, and as such using the internet for distributing the notes and softwares via the internet was a major pain. I tried uploading the notes to various file sharing sites - but the result was the same. With the ISP being down most of the times the
Read more

Another day and the internet never ceases to surprise me. Just downloaded a wonderful download manager named "Free Download Manager". Have tried Get-Right and Flash-Get, but I was never too happy with them. FDM seems to fit the bill perfectly. Try it if you have not done so far. Here is the link: < Another software review and this one is a rant. Just downloaded and purchased the F-secure Anti-Virus software. What a pain. The file-size is a whopping 82 MB and it politely says that it requires 1GB RAM to function well. My laptop has simply chocked up. What a size bloater. On top of that, it checks for internet update every hour when you are connected to the Internet. Could it not check just once a day? Finally, I wish they had put the size and the system requirement (in detail) on the website and not when you are on the verge of installing the downloaded software. IT industry please pay heed. You may be playing with the latest hardware but majority of the junta does no
Read more